There was a spectacular welcome for the ages by King Salman and the people of Saudi Arabia as President Trump embarked on his first diplomatic mission to Saudi Arabia. President Trump presented his view about the possibilities to reach stability in the Middle East to a respectful audience.

The American Press continues to ignore the tremendous energy flowing in the Middle East. They may be very good at posting complete text and video, but their tendency to broadcast gibberish, as part of their editorials, converts people into fools. Let’s ignore them.

Look beyond our borders to find better journalism. There was better coverage from media sources in the region. Find them, review then, and formulate your opinions without the “pinhead pundits” swaying your judgment.

A rare opportunity is presented for the Arab leaders and Muslim worlds to unite. The great men and women took advantage of several overtures from President Trump. King Salmon is leading the region alongside other great leaders like King Abdullah II of Jordan and Egypt’s President Abdel Fattah Al Sisias. Arab leaders and the Muslim world can count on President Trump and his Trumpsters for their staunch support for restructuring world hierarchy.

According to Breitbart News,  President Trump may sponsor a summit while “the iron is still hot.” The first challenge is to convince Qatar to stop sponsoring terrorist activities and contain Iran.

“It’s a choice between two futures and its a choice 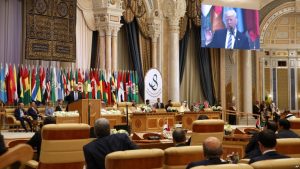 America cannot make for you. A better future is only possible if your nations drive out the terrorists and drive out the extremists,” Trump told the leaders of 55 Muslim nations in his now famous address.

We celebrate a rare opportunity to foster such welcoming initiatives. Trumpsters stand firmly behind President Trump in his bold move to transition America into constructive dialogue. Mr. President, bring us into a safer and prosperous world.

Visit our political blogs. Membership or 1-Time Donation is always appreciated. Thank you!