Trumpsters are jubilant about the Tax Reform Bill.

“We just got together and we would work very hard … it was a lot of fun. It’s always a lot of fun when you win,” Trump said, turning to House Speaker Paul Ryan and Senate Majority Leader Mitch McConnell, the partners in his emerging marriage of hard-core cooperation growing between the GOP’s insurgent and establishment wings.

“All friends. I mean, I look at these people: It’s like we’re warriors together,” Trump said.

“We’re just getting started,” said Vice President Mike Pence. GOP House Majority Leader Kevin McCarthy added: “This is a big day for America. This is America’s comeback.” Sen. Orrin Hatch of Utah, outdoing his peers in his praise of Trump, predicted the newly united GOP would “make this the greatest presidency that we’ve seen not only in generations, but maybe ever.”

Senator Tim Scott is not a ‘Token Republican.’

It often can be remarkably difficult to be a black Republican. Just ask Senator Tim Scott, a Republican leader from South Carolina who routinely faces abuse from the left for daring to be both African American and an outspoken conservative politician. 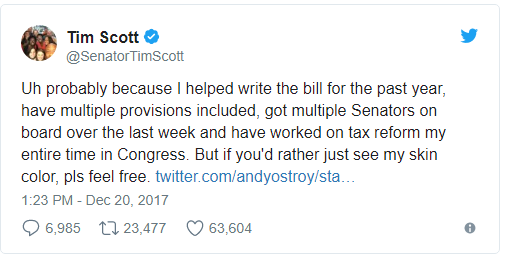 A few hours later, after fielding plenty of online criticism, Ostroy deleted his earlier tweets and apologized to Scott, for which he should be commended.

This is a demo advert, you can use simple text, HTML image or any Ad Service JavaScript code. If you're inserting HTML or JS code make sure editor is switched to 'Text' mode.

Trumpsters love to have "fun in the sun!"

A Trumpster is a YUUGE and WILDLY passionate advocate of President Donald J. Trump, his family, and friends. We are proud and very happy Deplorables!

Progressive Liberals suck the fun out of life. Unhappily, intolerance is a contagious vice which preys upon those afflicted with 'Trump Derangement Syndrome' TDS. They continue to slide deeper and deeper into the abyss.

Lord Trump is our knight in shining armor - the bright light emerging out of darkness and despair. He is our only hope.

We are the Rebel Alliance (Trumpsters) fighting against the evil Galactic Warrior Empire (Global Establishment) and their Stormtroopers (drones).

There was a spectacular welcome for the ages by King ...
0

Nine vulnerable Democratic Senators up for re-election in 2018, and Trumpsters need to kick them out!